Eminem Wiki
Register
Don't have an account?
Sign In
Advertisement
in: Song, The Marshall Mathers LP, Curtain Call: The Hits,
and 3 more

The Way I Am

"The Way I Am" is a song by Eminem, released in 22 April 2000. It was the second single from his worldwide hit album, The Marshall Mathers LP. It is also featured on his 2005 album Curtain Call: The Hits. "The Way I Am" features a much darker and emotionally driven sound than the album's lead single, which was "The Real Slim Shady." It is believed Eminem made this song to say, that now that he is famous he is always being bothered by fans. And as stated in the song his fans come up to him when he's eating, and when he's using the bathroom. He says this to show that he is never left alone by his fans. However, he also states he's thankful for all of his fans, so it's possible he just doesn't want them around him all the time.

The music video at the beginning plays a slow instrumental of his song "Kim", after the "Kim" instrumental is played, the song carries on as normal and when the song starts, it shows him on the point to advance forward to move on the wood window tablet of a very tall it shows him about to jump out the window of a tall building, and shows him falling through the sky, in a sequence inspired by the Coen brothers film The Hudsucker Proxy, in which the hero also falls slowly from a skyscraper window.[8] Marilyn Manson appears behind Eminem when the song refers to him — and a few more times thereafter. Other shots show fans coming up to him, asking for his autograph, The scene when EM throws a chair at his Slim Shady LP platinum plaque was inspired by the pressure EM felt by his label to write a hit as the first single for the Marshall Mathers LP. In “The Way I Am” video, Proof is in the scene when EM is doing a radio interview and flips the DJ off. Also, the little boy who asks for Eminem's photo in the public bathroom is his half-brother, Nathan. as well as Eminem in his neighborhood in front of an old house. At the end of the video, when Eminem hits the ground, it bounces him safely like a giant mattress. It Released By Paul Hunter , It was named the 19th Best Music Video of the 2000s by Complex magazine. In the music video version of the song, wind sound effects can be heard when Eminem is singing the intro, the first & last chorus. This can't be heard in the album version. The music video removes Eminem saying "whatever".

[Intro]
Dre, just let it run.
Hey yo turn the beat up a little bit.
Hey yo, this song is for anyone, fuck it, just shut up and listen.
Hey yo.

[Verse 1]
I sit back with this pack of Zig Zags and this bag
Of this weed it gives me the shit needed to be
The most meanest MC on this ... on this earth
And since birth I've been cursed with this curse to just curse

And I rest again peacefully (peacefully)
But at least have the decency in you
To leave me alone, when you freaks see me out
In the streets when I'm eatin' or feedin' my daughter

To not come and speak to me (speak to me)
I don't know you and no, I don't owe you a mo-therfuck-ing thing
I'm not Mr. N*Sync, I'm not what your friends think
I'm not Mr. Friendly, I can be a prick

Go call you a lawyer, file you a lawsuit
I'll smile in the courtroom and buy you a wardrobe
I'm tired of arguin' (of arguin')
I don't mean to be mean, but that's all I can be, it's just me

[Chorus]
And I am, whatever you say I am
If I wasn't, then why would I say I am
In the paper, the news everyday I am
Radio won't even play my jam

[Verse 2]
Sometimes I just feel like my father, I hate to be bothered
With all of this nonsense, it's constant
And, "Oh, it's his lyrical content -
That song 'Guilty Conscience' has gotten such rotten responses"

And all of this controversy circles me
And it seems like the media immediately
Points a finger at me (finger at me)
So I point one back at 'em, but not the index or pinky

Or the ring or the thumb, it's the one you put up
When you don't give a fuck, when you won't just put up
With the bullshit they pull, 'cause they full of shit too
When a dude's gettin' bullied and shoots up his school

And they blame it on Marilyn (on Marilyn) and the heroin
Where were the parents at, and look where it's at
Middle America, now it's a tragedy
Now it's so sad to see, an upper class city

[Chorus]
And I am, whatever you say I am
If I wasn't, then why would I say I am
In the paper, the news everyday I am
Radio won't even play my jam

[Verse 3]
I'm so sick and tired of bein' admired
That I wish, that I would just die or get fired
And dropped from my label, let's stop with the fables
I'm not gonna be able to top on 'My Name Is'

who think, I'm some wigger who just tries to be black
'Cause I talk with an accent and grab on my balls
So they always keep askin' the same fuckin questions (fuckin questions)
What school did I go to, what hood I grew up in

And I'm thankful for every fan that I get
But I can't take a shit in the bathroom without someone standin' by it
No, I won't sign your autograph
You can call me an asshole, I'm glad

[Chorus]
'Cause I am, whatever you say I am
If I wasn't, then why would I say I am
In the paper, the news everyday I am
Radio won't even play my jam

Eminem - The Way I Am (Official Music Video)
In Clean Version 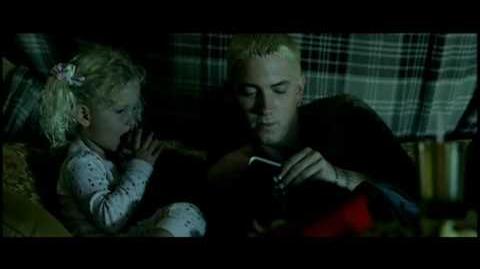 Eminem - The Way I Am
In Clean Version

The Way I Am (Clean Version) by Eminem - Eminem
In Clean Version
Community content is available under CC-BY-SA unless otherwise noted.
Advertisement