Eminem Wiki
Register
Don't have an account?
Sign In
Advertisement
in: 9 9 9, Grade A Productions, Interscope Records,
and 4 more

"Righteous" is Juice WRLD's first posthumous single with him as a lead artist. It was released on April 24, 2020, via Grade A Productions through exclusive licensing to Interscope Records, as the lead single for his posthumous album, Legends Never Die.

Juice Wrld's family announced "Righteous" would be releasing hours before it was released on midnight on April 24, 2020.[1] Rolling Stone described "Righteous" as "pensive" and stated that "it addresses anxiety and trying to quell it by self-medicating while also acknowledging the cyclical addiction that ensues."[2]

Lyrically, Juice Wrld dances around the theme of death in the song with the lyrics "Over ice, I'm freezing / Beautiful eyes, deceiving / We may die this evening / Coughing, wheezing, bleeding," and "High, I'm an anxious soul / Blood moons are my eyes, stay low / Red and black, they glow / Under attack, in my soul / When it's my time, I'll know."[1]

"Righteous" was produced by Nick Mira and Charlie Handsome. Mira worked with Juice in the past on numerous songs and albums, including Juice's multi-platinum-certified single, "Lucid Dreams".[4] The song was recorded at Juice Wrld's home studio in Los Angeles.[2]

The official music video for the song was published on the same day that the song was released on Juice WRLD's YouTube channel.[5] The video was directed, shot and edited by Steve Cannon. [6]

The first half of the video shows footage of Juice Wrld in his daily life, including: touring, traveling and recording at various studios.[7] The second half of the video is an animation depicting Juice Wrld fighting his inner demons before changing forms and leaving Earth.[8] The video concludes with him disappearing into space.[7] 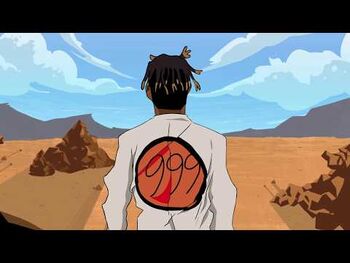 Cannon first started working with Juice Wrld in March 2018 as a photographer and videographer.[9]