"Lucky You" is a song by Eminem featuring Joyner Lucas. It was sent to UK contemporary hit radio on November 30, 2018 as the third single from Em's album Kamikaze, and was nominated for the Best Rap Song Grammy Award at the 61st annual awards ceremony. The single also reached the top 10 in Australia, Canada, Finland, Greece, Ireland, New Zealand, Norway, Portugal, Sweden, Switzerland, the United Kingdom, and the United States.

The official video, directed by James Larese, was released on September 13, 2018. In the video, it follows Eminem and Lucas in combat vests and pants strolling through the ruins of a city. It includes wrecked cars and abandoned buildings. Throughout the video, multiple hooded men in black sweatshirts appear to by copying whatever the rappers are doing. This is supposed to be a shot at the new generation of rappers copying whatever the bigger artists are doing. One scenes includes them performing random dances, which the hooded men copied. In the middle of Eminem's verse, a gunshot from the original track goes off, sending the hooded men into the sky. The video ends with the two rappers walking away from the swarm. 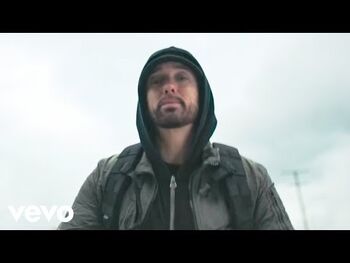